Skip to content
Are you having a hard time with skateboarding tricks? I am here to help you out with a step-by-step guide of the five easiest and five advanced tricks, i.e. skateboard tricks list easiest to hardest. Whether you are a beginner or a pro, there is something for everyone.

Most of the aspiring riders out there get into skateboarding with the dream of learning skateboarding tricks all day. Not only does a skateboarding skill look good, but it feels incredible to yourself when you pull a trick off and impress your fellow skaters.

Now, skateboarding has been around for quite a long time. Throughout history, there have been hundreds of tricks that have been invented by skateboarders. While some are pretty basic, some of them can also require some serious skill to pull off.

If you are thinking about getting into skateboard tricks, I will help you out with my ears of experience in the field. Here I have compiled the easiest to hardest skateboard tricks list (5 of each) and break them down in a step-by-step guide. So, without wasting your time, let’s dive right into the world of skateboard tricks.

What are the Easiest Skateboard Tricks?

In this part, I’ll talk about some of the most basic tricks that every beginner should learn to move on to more advanced tricks. If you have some prior knowledge in the field, you’ll probably be familiar with these tricks, or at least their names.

Additionally, I am not saying you’ll learn them right away, but they are way easier to master than some advanced tricks. These tricks will set the foundation for the advanced tricks I’ll discuss later in the article. One thing keep in mind. Before doing tricks try to do research on which skateboard is suitable for tricks and get the best one.

Originally invented in 1978 by Alan Gelfand, Ollie is considered to be the stepping stone of skateboarding tricks. In simpler words, Ollie is just jumping with the skateboard. As a large portion of skateboard tricks involves jumping, it’s a significant yet easy trick to learn. So let’s see how you can do it.

A Shuvit (or Shove-it) is another simple trick done by skateboarders, which again involves jumping. But instead of a 360-degree kickflip, it involves a spin of 180 to alternate between the nose and tail of the board. This trick alone has quite a few variations of its own. But here, I’ll show you the basic 180-degree shuvit.

Flip tricks have been around since the invention of skateboarding. But, if we talk about the variations a regular flip trick can have, kickflip is the easiest one for sure. For this trick, the rider launches the board in the air and makes a 360-degree flip before landing on the board again. Here’s how you can do a kickflip easily.

It’s not exactly a trick like others in this list, but this one looks pretty cool if done with perfection. Powerslide is just a fashionable way of stopping and slowing down your skateboard instead of regular braking. For this trick, skateboarders turn the board sideways so the wheels skid and reduce the speed. The steps mentioned below can help you do a powerslide easily.

A manual is very similar to the two-wheeler wheelie we do, but this time it’s with a skateboard, either with the front or back wheels. In this part, I’ll talk about the standard variant of the manual, which is lifting the front wheels up. Let me show you how to do a standard manual properly.

What are the Hardest Skateboard Tricks?

Now that we are done with the basic tricks let’s move on to something advanced for more experienced skateboarders reading my article. Additionally, you can also get back to this part after you have mastered the beginner tricks. Let’s have a look at some of the hardest skateboard tricks you can do to impress everyone in a skate park.

Remember I mentioned earlier that lots of tricks would be similar to each other moving forward? Hardflip is a prime example of that as it’s a blend of front-side shuvit and kickflip simultaneously. Just like the name suggests, it’s one of the trickiest ones to pull off. Let’s show it to you step by step to make the process easier.

Another trick that originates from kickflip. To put it simply, it’s a variant of kickflip where the board flips in the opposite direction of a kickflip if executed properly; this trick can be an absolute treat to the eyes. Below I have broken down the tricks step by step.

Blunt fakie is a variant of the regular fakie we are used to doing. Unlike the regular fakie, it’s more of an advanced-level trick, which requires mastering the regular one first. This is the first trick on my list, which will need a quarter pipe to pull off. Let’s see how to do this trick.

Laser flip is a variant of the heelflip I mentioned earlier with a combination of shuvit. For this trick, you’ll basically do a heelflip, where the flip will be 360 degrees. This is one of the hardest tricks ever invented, so mastering it may require a lot of practice. Additionally, I will show you how to do it step by step to make the process easier.

Though the name might imply it’s the hardest skateboard trick, it’s not actually as impossible as the name suggests. Invented by skateboarding legend Rodney Mullen, it’s considered as one of the most complex tricks in skateboarding. The steps may seem easier at first, but it’s challenging only because there is always a lot going on with your back foot in a very short time. So let’s see how you can do it.

Q: What is the most difficult skateboard trick?

A: If I have to pick one from the list of easiest to hardest skateboard tricks mentioned above, Laser flip is the most challenging trick out there to pull off. As you need to balance out between lots of things at a time, it takes a lot of practice and dedication to master this trick.

Flicking and stomping the board requires a lot of strength. Additionally, you’ll need a second flick, as mentioned in step 3, and mastering the direction of this flick is one of the toughest things to learn. The timing flicks, and stomping combined make laser flip one of the most challenging skateboard tricks.

Q: What is the easiest skateboard trick?

A: The answer to this question will vary from person to person. For me, as a beginner, kickflip was an actual trick I found easiest to pull off. Some might say it’s ollie or shuvit, but for me, it was kickflip as it opened the doors for many advanced tricks afterward.

There are only two main parts, one is launching the board, and the second is sliding the board with your feet and making the 360-degree flip.  Because of the simplicity of this trick, it’s the easiest skateboard tricks for me, yet looks super cool to me every time I see someone doing it.

Q: What is the most impressive skateboard trick?

A: Again, it’s a debatable question as everyone will have a different opinion here. If I have to choose one from the list, it has to be the blunt fakie. As a trick done on the quarter pipe, this might not be the hardest trick.

But when the rear wheels lock in at the top of the quarter pipe and then pop off after some time, it looks really impressive. As an honorable mention, I would also like to include ollie impossible too here. It’s another absolute beauty that looks super impressive if you can pull it off properly.

Q: What is the best position for practicing between stationary and moving?

A: I have seen different opinions among different pro skaters and skating forums about this matter. Though it totally depends on the individual, I think you should try to practice a trick while moving. Because actually, you’ll be doing every trick while moving after the practice.

The problem with stationary position is that it can get tricky to adapt to the movement after you practice and learn a trick. However, some parts of a particular trick can be done in a stationary position to reduce the chance of falling off the board. 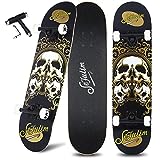 There you have my skateboard tricks list easiest to hardest. When I was a beginner a decade ago, I started with the basic ones which helped me a lot to learn the advanced ones afterwards. If you find the guide a little hard to understand, you can also search on YouTube with their name to have a better understanding.

Additionally, I tried to make the list of skateboard tricks easiest to hardest with tricks that have similarities with one another for ease of learning. Lastly, I hope my article will be a great help for you to become a pro skater one day. Till then, just keep practicing and have all the fun skateboarding has to offer.

6 Best Insoles For Skateboarding of 2022| With Buying Guide

How to Get More Pop on a Skateboard 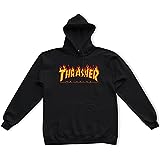